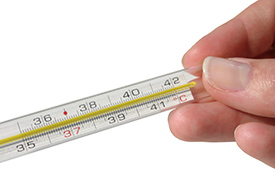 Wilson's temperature syndrome manifests itself in a number of ways. According to doctors who treat Wilson's syndrome, patients suffering from the condition may notice:

In addition to these broad symptoms, some health providers beleive that Wilson's syndrome also affects a number of other health conditions. These issues include:

Wilson's syndrome manifests itself with either some or all of these symptoms. Wilson's syndrome, according to some providers, often goes undiagnosed because it can mask itself in any number of symptoms.

Providers who treat Wilson's thyroid syndrome typically do so with targeted thyroid  supplements. Those providers believe that using consistent levels of T3 hormone supplements can help combat the effects of Wilson's syndrome. These T3 supplements are typically combined with a number of other treatments, including:

The T3 used in Wilson's syndrome treatment is sustained release, meaning that it is delivered consistently over a long period of time. This makes it different from normal T3 supplements, which are instant release.

Many providers believe Wilson's syndrome to cause many debilitating and chronic symptoms. If you would like to learn more about Wilson's syndrome, call (765) 259-0545 or contact Charles Turner MD online.